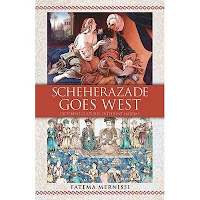 I might buy her a copy of a lovely Islamic feminist text which made me feel liberated, Scheherazade Goes West.  Its author, Fatima Mernissi, talks about how in the Ottoman empire the sexiest women were those who could do algebraic equations and write poetry, engaging with their lovers' minds instead of causing their brains to go blank with lust.
I hope too that times and expectations for women have changed a bit since I was sixteen, when my friends' and my own dreams centred around getting married;  all my mother and I imagined for my future was my wedding.  I was thinking the other day that if the Piglet comes home to say she has met a nice person I will be very happy for her, but the day she comes and tells me she got a good job I will be truly ecstatic.

Posted by Anthropological Mum at 07:30