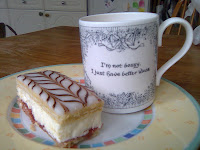 Bad news.  My local Tescos has started stocking cream slices. This means that I can go and get a box of two and have one for elevenses and one for tea every day!!!  I'm not sure my jeans will stand the pressure.
Cream slices are not like Proust's madeleines.  They aren't the crumbling means to nostalgically recover tear-moist lost times. Cream slices are about the here and now.  The flaky pastry with its thin soupçon of jam, the fat layer of squidgy cream, the smooth white royal icing and the merely decorative flourish of chocolate.  There's no room for nostalgia once you've eaten a cream slice.  You have to immediately set to work to scrape any left over cream and jam off your plate.

Until recently the cream slice was only available to me if I were in the city centre and happened to be going to Marks and Spencer, but now I could be buying a box of two twice a day, if I plan my school collection trips properly.  Drastic action is needed.

Cream slices are not, of course, something the Good Fella would bother with so it's no use relying on him to eat up the odd extra one lying around.  He is a chocolate éclair eater, for Proustian reasons, having been allowed to have them as a special treat as a child.  I have always discouraged the Piglet from cream slices too;  not through the useless mechanism of telling her not to have one, but through eating them mainly when she is at school or on the rare occasions when there is one around at Sunday tea time, putting it carelessly on the side of a plate with a large selection of attractive chocolate biscuits in the foreground.  I feel it would be wrong to encourage the Piglet into my cream slice habit, and this might still mean having one a day - which while better than four is not the optimum cream slice eating way.
Another solution could be to rely on my food snobbism.  I think that the pastry on the Tescos cream slice might be a bit less fresh than the M&S one.  However, as an anthropologist it is probable that I would have to engage in extensive comparative slice tasting to test out this theory, involving the consumption of so many cream slices it might even put me off my dinner.  (Highly unlikely.)
No the only answer is rigorous philosophical praxis.  The philosopher Epicurus suggests that while pleasure is the greatest good in life, it can only be attained through an ascetic approach, not through a gluttonous hedonism.  Giving up my cream slice will not lead me to greater satisfaction in removing the fear that I might never be able to get another one which Epicurus suggests will happen.  However eating one every day will not lead to greater happiness either.  Gone are the careless days of picking one up whenever I remember as I rush down the aisles of Marks and Spencer.  I will have to consider very carefully whenever confronted by the tempting little box with its plastic window seductively revealing the two little slices nestling within:  Is this the perfect day for the cream slice?  Conscious reflection on the manifold beauties of life, one's place in the universe, the place of the cream slice in the tummy - this is the way to happiness.
道
Posted by Anthropological Mum at 05:38