When the Chips are Down: An Ethnography of the Potato

I have an extensive cultural understanding of rice.  I know how to distinguish between Basmati, Arborio, Thai Fragrant and pudding rice.
I buy my regular rice in 10 kilo bags, and I currently have about 5 other specialist varieties in small bags in the cupboard.  I have a rice cooker (I hate it because it's a badly designed cheap foreign one, not an elegant Japanese one).  If I have to, I know how to cook rice in a saucepan so that it comes in fluffy light separate grains not one mushy mass. When I was growing up, there were few specialist food shops in the UK and certainly none near our green and pleasant (isolated) rural home so my mum used to buy pudding rice and wash it and wash it to get the starch out.  When I was poverty-stricken in London I used to buy broken Thai fragrant - less than £10 for a 10 kilo bag - in Chinatown and lug it home via wheely trolly on the bus.  Nowadays I drive in a housewifely way to a local Korean shop and get a bag of lovely round grain rice, bit cheaper than top quality sushi rice.
Rice is such a major part of our culture that in East Asian gay circles, if you're a white person who likes Asian men they'll call you a Rice Queen while if you're East Asian and like East Asian people they'll say you're Sticky Rice.
I always wanted to understand potatoes better.  There is the Potato Council with earnest articles about drought and potato pests, and it has a daughter website (Love Potatoes) which gives you recipes for potatoes.  However you can't get that brought-up-with-them feeling for potatoes from a website.

I quickly realised that the acquisition of the Good Fella was a golden (that perfect chip colour) opportunity to realise my long-cherished dream of being both a rice connoisseur and a potato queen.  Like any ethnographic study, it would take time but I would immerse myself in his Black Country ways by spending lots of time with my Mum-out-of-Law, asking ignorant questions and copying her ritual ways with the sacred tuber.
After many years of research I am at last in the position to write my magnum opus on the way of the potato.  Here I outline a few early findings from my study, with reflections on my methodology.
As for all Black Country women of her generation, my MoL's life revolves around potatoes to such an extent that she doesn't even think about it.  When she was pregnant she ate only potatoes and chocolate.  She knows when summer is here because the taste and texture of chips from the fried fish shop are different.  For Sunday dinner she usually cooks both boiled new potatoes and roast.
She insists on using the Cyprus potato, as it rarely has bad bits which you have to cut off and waste and is highly versatile.  It can be used for mashing, roasting, chips or jacket potatoes.  (It's also expensive, only the best for the MoL.)  As soon as I see Cyprus potatoes in the shops in the autumn I rush to phone her and she says:  "I know, I bought some at the greengrocers yesterday." 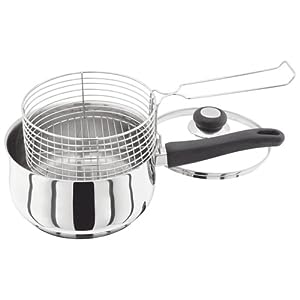 After a couple of years observation at her elbow, I took the bold step of asking my MoL for a chip pan for Christmas.  As I had anticipated, it came with a string of verbal instructions.  Three times she wavered, saying:  "I'm not sure, promise me you will never leave it and go out of the kitchen while it's on the cooker".  She went to several shops, none of which had the right sort of pan, and finally got my Dad-out-of-Law to help her buy one on the internet.  It is lighter than hers, which she has had for thirty years.  (She's currently much annoyed by the fact that as chip pans have changed to metric sizes, she can't get a replacement basket.)  I've already managed to build up an impressive black layer of burnt grease around the bottom of mine, although nothing compared to the all-black ingrained chip-cooking patina on hers.
My MoL explained that I should use 1 litre of sunflower oil to cook the chips - it should come to about 2/3 the way up the side of the chip pan.  Cut the chips and dry them with kitchen paper - this makes them cook more quickly and enables you to use your chip oil for longer (after a while it gets watery).  Put the pan on high heat with the lid on.  Do Not Leave the Kitchen.  When you think it's hot enough, put in one chip.  The temperature is right when the chip floats to the surface.  Take out the basket and put the chips in, then lower them into the hot oil.  It will probably froth right up, keep a close eye on this and don't let it froth over.  (I find that easing the basket of chips out of the hot oil makes the frothing go down a bit, then you can lower it back in.)  Leave the lid off while you cook the chips.  Do Not Leave the Kitchen.
Chips take about 15 minutes to cook when the oil is new and they are dry.  When they seem to be 'boiling' rather than deep frying, it's time to change your oil.  Wash the pan (I do this carefully, attempting to preserve the black patina of burnt oil my pan is slowly building up.)
Love Potatoes' recipe for chips suggest you do oven chips, and from the picture I think you're even supposed to leave the skin on.  I expect that's much healthier but I wouldn't dare suggest such sacrilege to the MoL.  The Piglet and her pigletty friends love homemade chips.  As for the Good Fella, it's amazing how a simple dish of faggots, chips and peas can make his face light up.
We live in South Wales now, apparently the only place in the world where they serve that delectable combination, the half n' half - half rice and half chips, ideally with curry sauce on top.  I have not quite got round to trying it out, it'll have to wait until I can leave the Piglet with her box of matches in responsible care for a whole weekend, and get drunk enough (in the interests of proper ethnographic experience only of course).
Posted by Anthropological Mum at 05:45